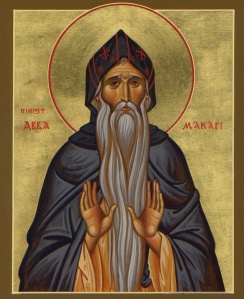 While Abba Macarius was praying in his cave in the desert, a hyena suddenly appeared and began to lick his feet and, taking him gently by the hem of his tunic, she drew him toward her own cave. He followed her, saying, ‘I wonder what this animal wants me to do?’

When she had led him to her cave, she went in and brought her cubs which had been born blind. He prayed over them and returned them to the hyena with their sight healed. She in turn, by way of a thank you offering, brought the man the huge skin of a ram and laid it at his feet. He smiled at her as if at a kind and sensitive person, and taking the skin, spread it under himself.